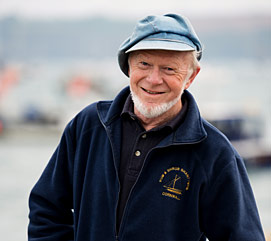 Known as the team hamster (owing to his biscuit munching habit), we are delighted to welcome Tony as part of the crew – he’s getting so absent minded that he needs someone to regularly tell him what day of the week it is, where he is and whose turn it is to sing – and between us we can usually answer these difficult questions.

First appearing on the local folk scene during the 60’s at well known venues such as Tankards Folk Club and The Royal Albert Hall, not only is Tony a fine singer but also an accomplished musician and dancing (doll) master to the stars – many years and many groups later, he hit the big time by joining Rum & Shrub.

We enjoy his unique brand of singing and we know you will too – providing he doesn’t accidentally get lost somewhere when we’re out on tour.