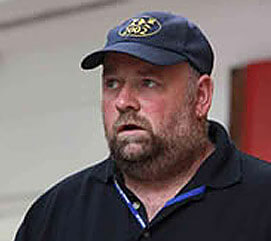 Often known as Nidge this well known mid Cornwall singer disappears into Padstow every year around May Day only re-emerging when he has sung every song he knows at least twice, there’s no beer left and he’s getting a bit peckish. He also seems to have a CD collection greater than that found in the average HMV warehouse.

Nigel might be short in stature but it doesn’t stop him deafening the audience once he starts singing. Owner of the imposing title “Team Dandy”, he shows us the way a shanty singer of the twenty first century should dress – where he leads, others follow!