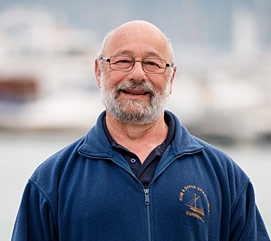 The strain of being secretary to this rabble is clearly beginning to show. Once six foot tall with a full head of hair, this now diminutive (and bald) singer started visiting folk clubs about the same time he discovered the delights of beer. Only to be seen joining in with the chorus, he was moved to start singing in public when, during his Somerset period, he joined a morris team that didn’t sing!

On returning to Cornwall and armed with an extensive repertoire of two songs new dance teams beckoned together with the associated pub sings. Discovering that pub and club singing was getting to be more fun than dancing and invited to join the new shanty crew then called “Bully In The Alley”, this keen sailor decided it was time to start learning a few shanties – one day he might actually manage it!