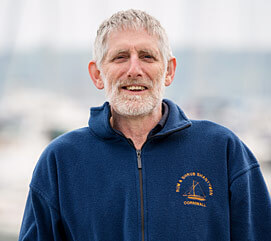 Colin has been singing since his schooldays in Falmouth and was influenced in the early days by the Mitchell Folk Cottage and then 9 years in Bangor North Wales with its itinerant musicians and singers passing through on their way to Ireland. One of the itinerants was Jim Mageean, that fine singer of sea songs and shanties and source of many of Colin’s songs.

It has often been said that Colin has been singing for a long time. Usually around the 20th verse. This reputation is grossly unfair as he frequently sings songs of only a few verses – and the memory doesn’t get any better.

He first discovered rum and shrub on a Morris tour to Haddenam where the team was locked in on the right side of a rare pub in England – one that stocks shrub. And as they say, “it’s been downhill all the way since!”

Like many of the group he turned to singing as an escape from ringing bells, leaping around waving and clashing sticks, a black face and a bad back.