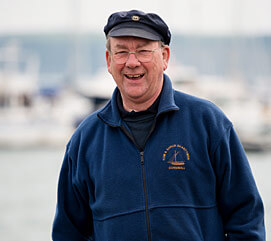 Our senior man, Roger started his folk singing career as an MC at Falmouth’s legendary Tankards Folk Club where he honed his special talent for a unique style of introduction to perfection. This skill with words (or verbal abuse depending on your point of view) stood him in good stead when he emerged some time later as a singer/songwriter. Rumour has it that he once wrote a song before finishing his pint, although he doesn’t usually drink that slowly.

Despite being world famous, he still carries out his duties as team treasurer, cooking the books like a man possessed. More importantly, Roger is also responsible for checking the output of Skinners Brewery on our behalf – a job to which he is ideally suited since he seems to have had lots of practice over the years.